The Blyde River Canyon, traditionally known as Motlatse, is the third deepest canyon in the world and on the scale of the Grand Canyon and Namibia’s Fish Eagle Canyon. It ranks as one of the most spectacular sights in Africa. This great Escarpment is the kind of place where brochures and guide books run out of original adjectives to describe the fresh mountain scenery and magnificent panoramic views over cliffs rising up to 800m from the river bed. 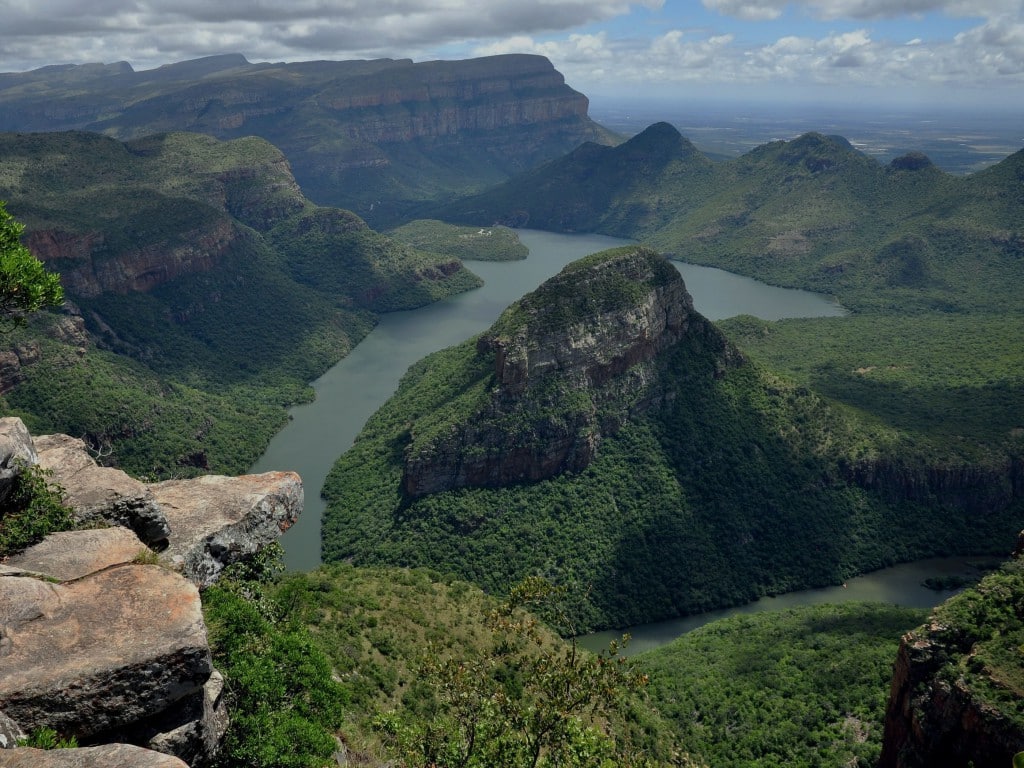 The canyon extends over twenty kilometres before the Escarpment begins its descent to the Lowveld and on to the coast in Mozambique. A fantastic perspective is from the air by microlight or helicopter. 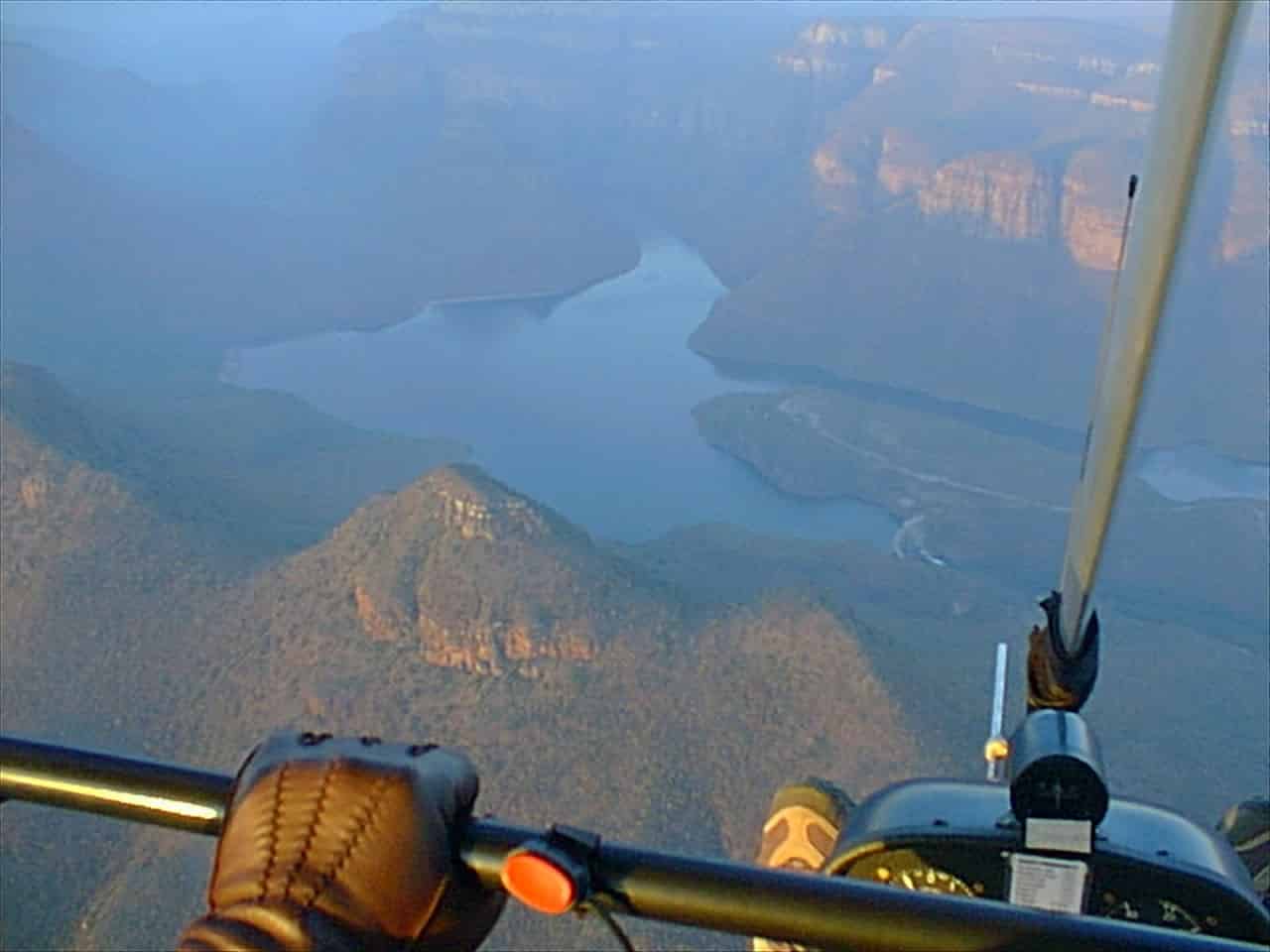 Blyde Canyon cuts through the Drakensberg Mountain Range, one of the seven major mountain systems in Africa. The botanical wonders of these high altitude afromontane forests can be witnessed while walking some unforgettable trails laid out under the forest canopy.

Beneath the Canyon the Blyde River also yields the unique and critically threatened Lowveld Riparian Forest, which now covers only 100 hectares in extent.

The Blyde River is dammed at the mouth of the Canyon to create the Blyde Dam at Swadini. Enter the Canyon from the Lowveld (the bottom, Hoedspruit side, signposted to Swadini), head to Blydesrivierpoort, and you can take boat trips across the Dam to the spectacular Tufa waterfalls, arrange canoeing, rock-climbing or abseiling activities, or simply hike into the great outdoors. 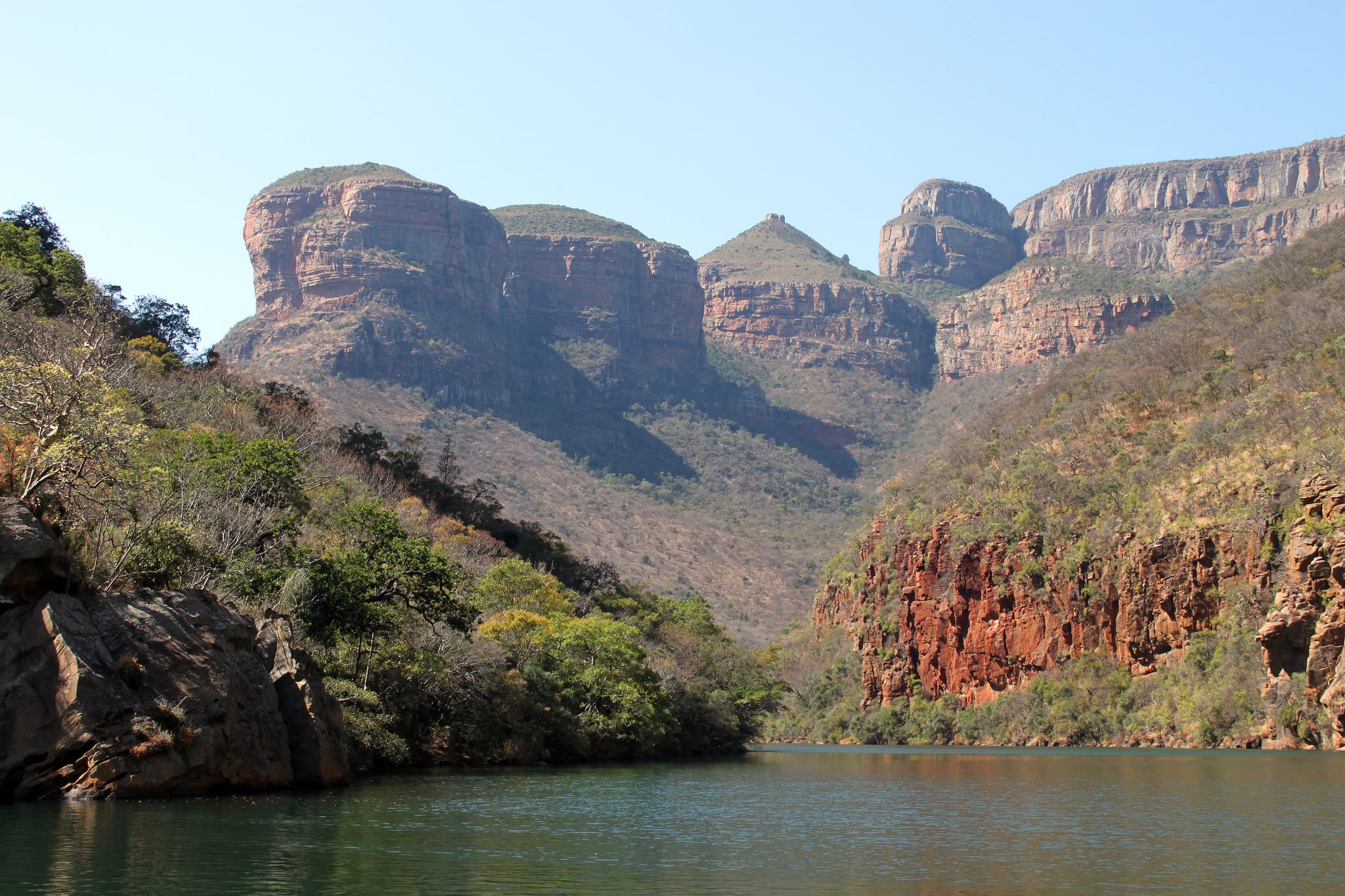 There is an information centre at the end of the road with excellent views over the dam; prior to this there are viewpoints and (approaching from Aventura Swadini), the waterfall trail up to the Kadishi Tufa is signposted around halfway along on the right, followed by a path down to the dam wall on the left.

Blydesrivierpoort is a dead-end, and you will need to return to the T-junction at the bottom and turn left to rejoin the main road and head up for the spectacular views from the top. Climb up onto the Escarpment through the Strydom Tunnel (signposts direct you towards Ohrigstad).

Immediately after the tunnel, at the Abel Erasmus Pass, there is the opportunity to see one of the rarest birds in the world. The presence of the Taita Falcon in South Africa was discovered only in the 1990s. There is currently a nesting pair in the mountains opposite the curio sellers at the Strydom Tunnel (look for the sign painted onto a rock simply advertising the ‘Place of Bird’).

There are then some spectacular sights in quick succession as you follow the road along the rim of the Canyon (turn left onto the Panorama Route (R532/ R534) at the top).

From the Hoedspruit end, first off is the Three Rondavels viewpoint over huge rock spirals rising spectacularly out of the far wall of the canyon. A glorious spot for photography, this outlook bears repeated visits to watch the changing light and weather transforming the view.

Where the Blyde and the Treur Rivers meet, water erosion has formed one of the most remarkable geological phenomena in the country, known as ‘Bourke’s Luck Potholes’.

Over thousands of years, surreal cylindrical rock sculptures created by whirling water, have formed a series of dark pools which contrast spectacularly with the streaked white and yellow lichen-covered rocks. 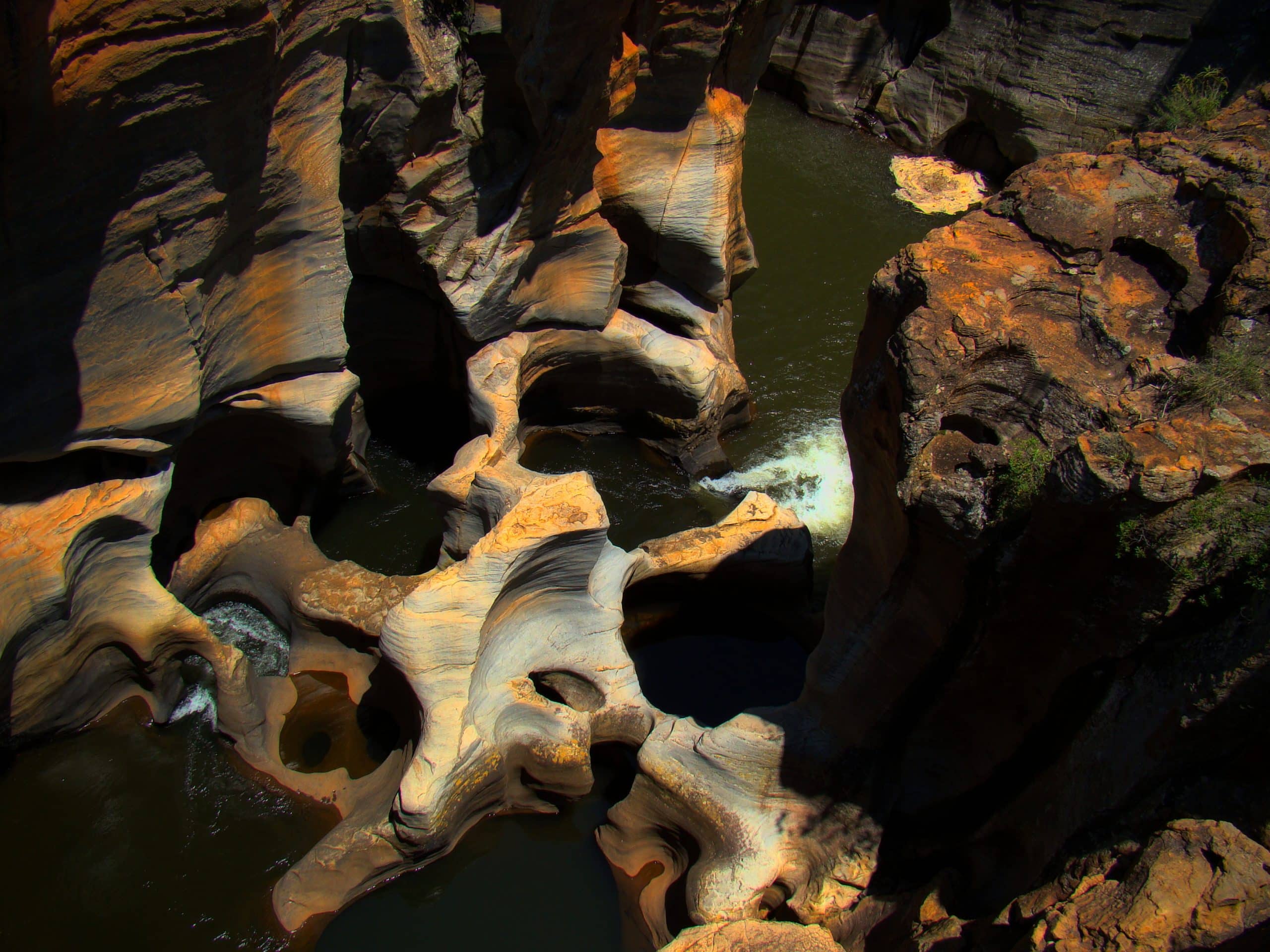 Following the road and the Treur River south, there are further spectacular viewpoints: Wonder View, God’s Window and the Pinnacle. 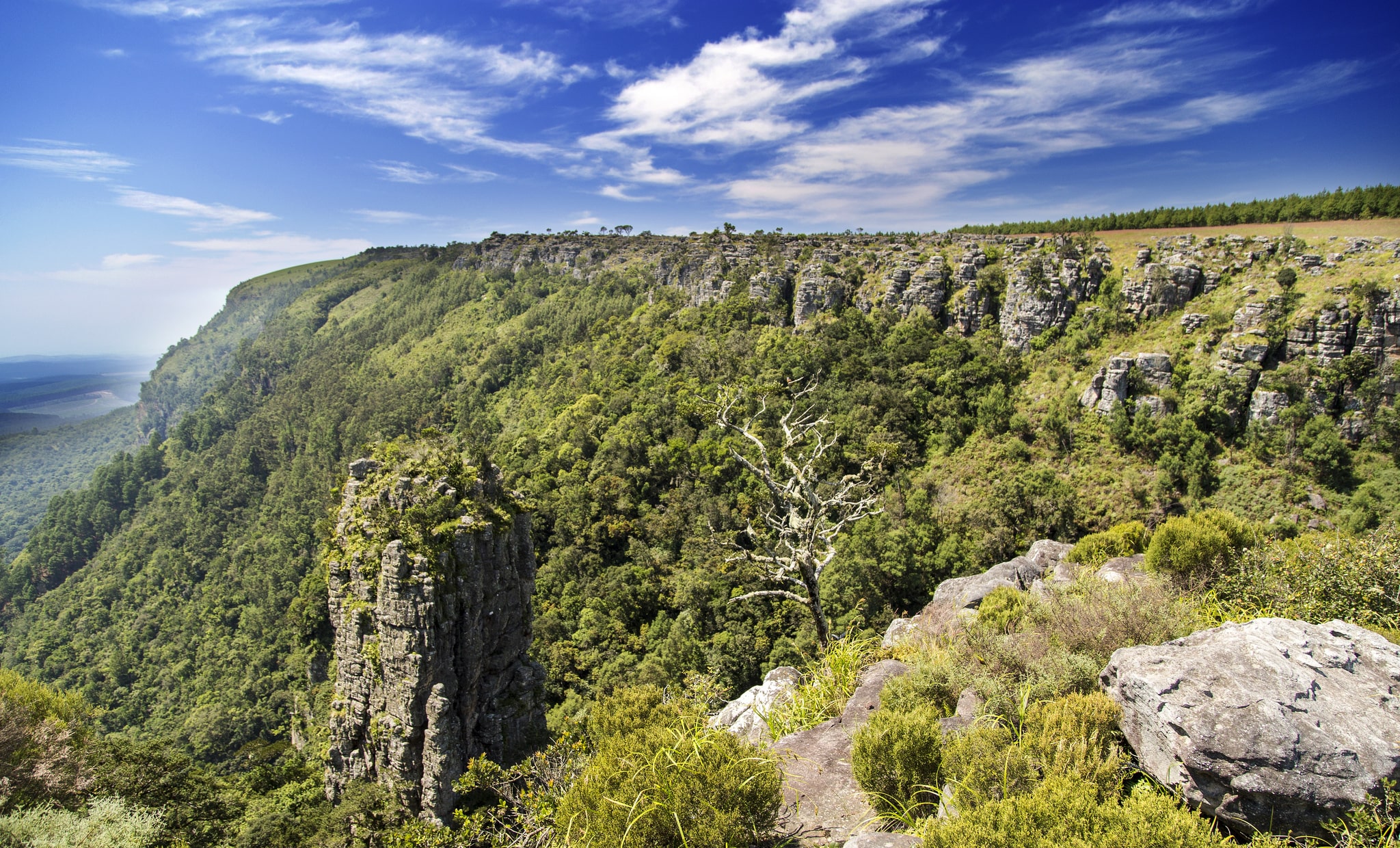 Blyde Wilderness Lodge is a peaceful riverbank bed-and-breakfast lodge offering a family welcome and a tranquil retreat, particularly after time on the hot, dusty Kruger roads. There are two pools set in beautiful gardens with general game including resident hippos and crocs. Massage is available

Hoedspruit is between the centre of the Kruger and Blyde Canyon, and close to many private reserves. It is a good place to recharge or base yourself for local activities such as microlighting, ballooning. It has its own airport, and restaurants, shops, accommodation.