Three provincial airports directly serve the Kruger, with a further mainline airport (KMIA) fulfilling the needs of Nelspruit-Mbombela’s city inhabitants and providing a wider range of airlines and destinations than the smaller airports. Lodge-hopper services depart to the major private areas from Nelspruit and save considerable time (the gate to the northern sector of Sabi Sand is at least  2½ hours by road from Nelspruit; the drive to Makuleke in the far north of the park takes about 7 hours).

Flight frequency goes down the further north you go, with one daily flight to Phalaborwa augmented by afternoon flights for four days of the working week. Most use to you as a safari visitor will be Skukuza (for the south of the Kruger), Hoedspruit (for the central Kruger), and KMIA for its wide range of inbound flights and greatest range of lodge-hopper services.

Skukuza Airport is the new kid on the block. It is inside (and serves) the south of the Kruger park, and is good for the southern and western sectors of Sabi Sand, much of which can be accessed by 90 minutes on the road. Close to the largest government restcamp which has the same name, Airlink built this facility with partners which included the nearby Lion Sands luxury lodges. Airlink currently operates daily flights from Johannesburg and Cape Town to this unique private airport inside a national park.

Hoedspruit Eastgate airport covers the private reserves to the west of the central Kruger. It offers a very relaxed welcome to the bush, with an outdoor courtyard, small cafeteria and a bar specialising in drinks made from the local special Amarula liqueur. 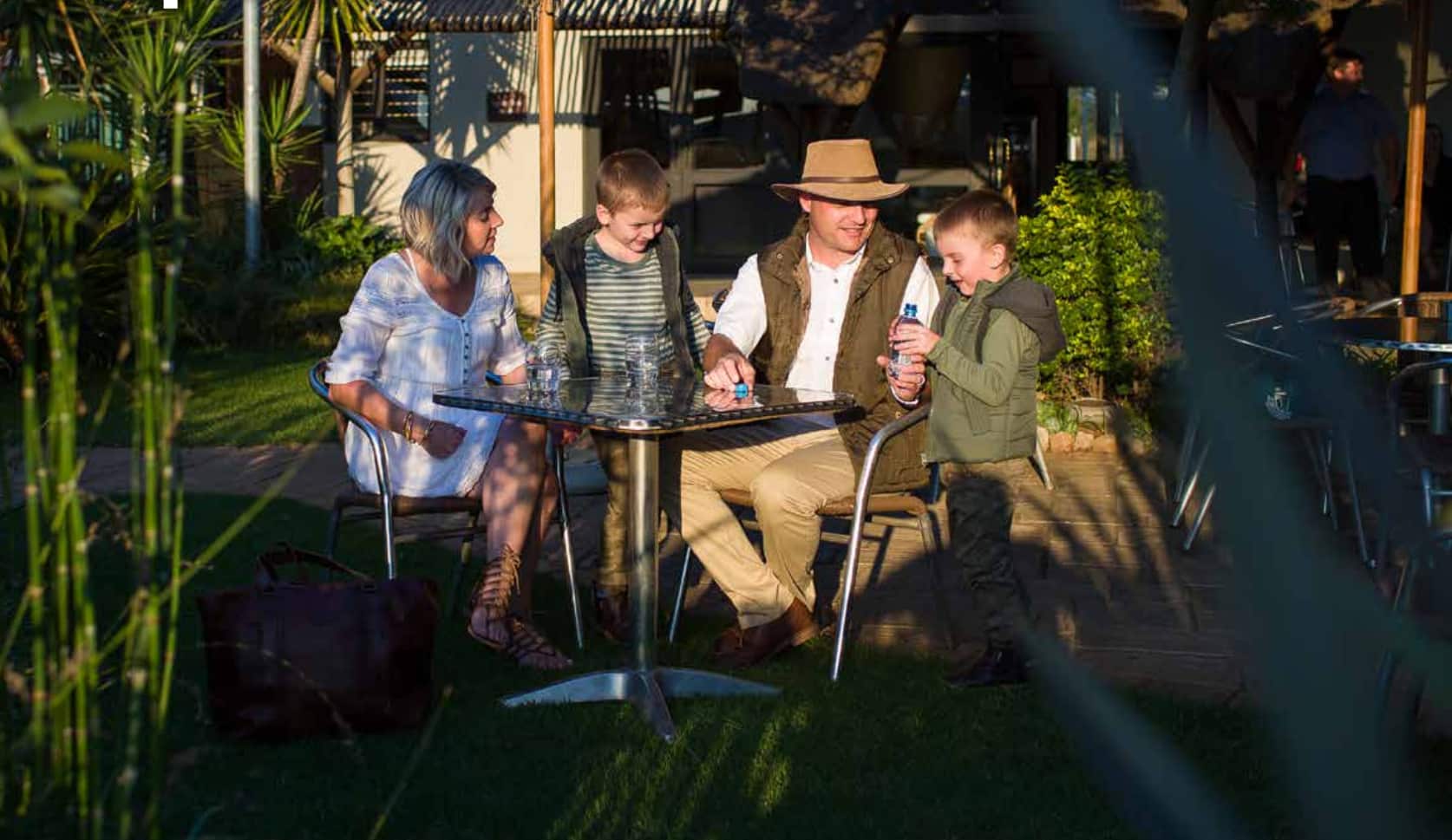 You have to pass Hoedspruit to get to close-by southern Timbavati and Timbavati north, and gates to Klaserie and Balule are on the airport access road. Kapama is a fenced private reserve offering an expeditious fly-in solution with its entrance opposite the Eastgate airport’s boom gate.

Hoedspruit is the closest mainline airport to the northern Sabi Sand and Manyeleti, which are reached via the road to the Orpen gate of the public park.

Hoedspruit Airport currently receives three flights daily from Johannesburg and two from Cape Town. It is also a node on Federal Air’s lodge-hopping network with flights to Timbavati, Sabi Sand and KMIA. 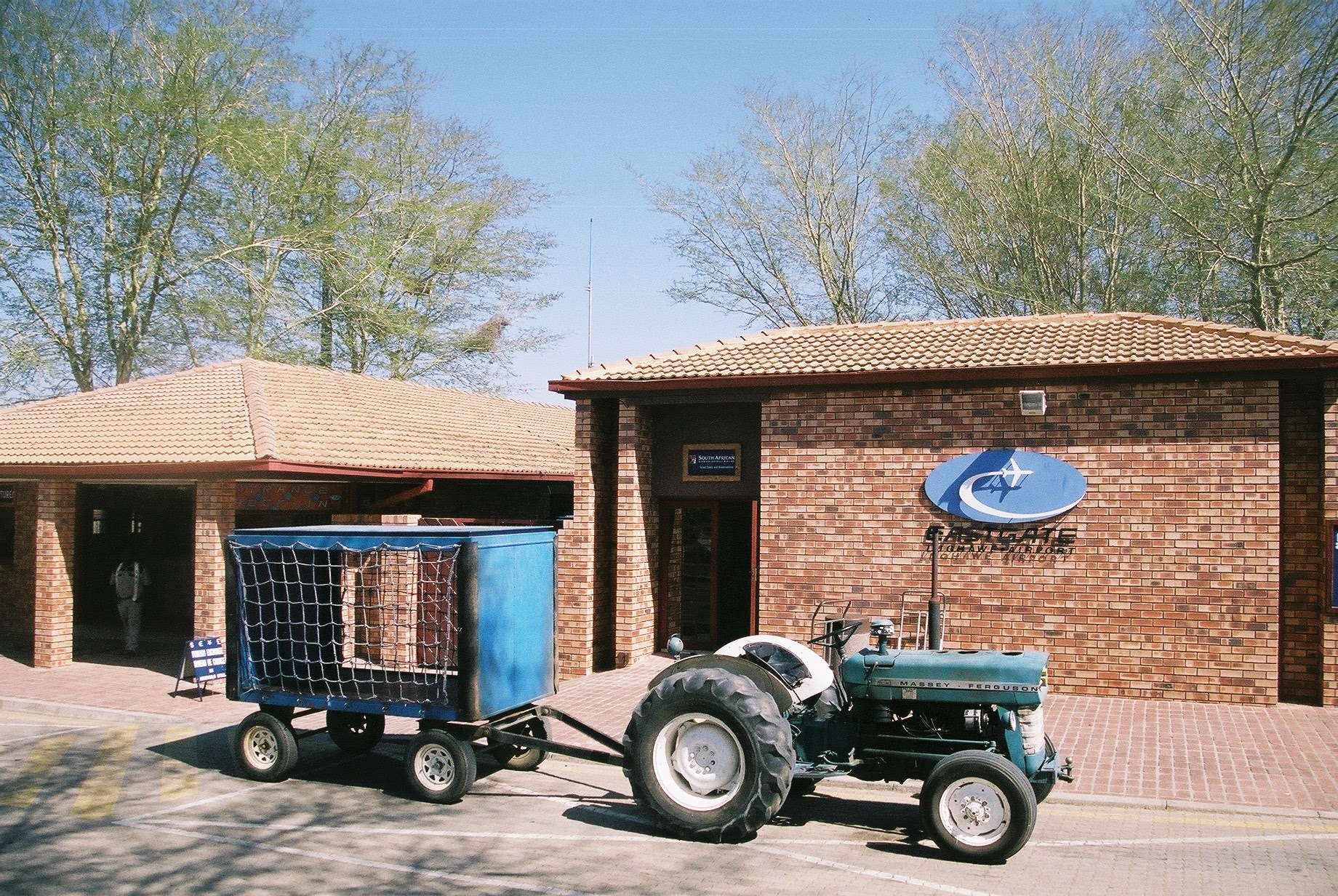 Kruger Mpumalanga International Airport is between Nelspruit and White River at the foot of the Kruger National Park. Serviced by the widest range of airlines from the most destinations, this airport serves southern and western Sabi Sand lodges within a 2½ hour drive/ transfer. The widest range of lodge- hopper shuttles is here, with Federal Airlines and Airlink offering a service.

The southernmost gates to the public Park are close by: Paul Kruger, Numbi, Crocodile Bridge and Malelane. KMIA is the only local airport that has benefitted from budget airline coverage. This tends to make it a cheaper route than others where competition does not exist.

Phalaborwa airport is best for the central part of the public Kruger, located 2km from the gate of the same name.

It benefits from the nearby presence of a huge mining operation which requires flights for the business community later in the day than Hoedspruit (where all flights depart and leave at lunchtime). There are currently two flights a day to/ from Johannesburg operated by Airlink. On the map, the airport may appear to  be of use for Klaserie and Balule lodges, but their main gates are south of the Olifants river and consequently closer to Hoedspruit, 45 minutes drive away.

There is usually little to differentiate between internal flights to these two airports on price. The location of your first Lodge will determine which is most convenient if there is a choice of flight available for your dates.

Lodge-hopper services are operated by Airlink and Federal Air, originating from Skukuza and/ or KMIA (Nelspruit). They operate frequently, every day, and their schedule and timings are determined by the demand for flights for guests staying at private reserves in Sabi Sand and Timbavati. Explore Kruger lodges with airstrips.

Guests at MalaMala and adjacent private lodges in the Sabi Sand will  find a twice-daily scheduled Federal Air service from Johannesburg directly into a smaller sister landing strip (airport code AAM) in the Reserve. This is operated by a twin-engined propeller aircraft and as luggage space is limited there is complementary storage at O.R. Tambo. It costs about twice the price of scheduled flights to the other airports.

A long-hoped for possibility has been that either Kruger Mpumalanga (representing the eponymous Province) or Hoedspruit (Limpopo Province) will start receiving direct flights from abroad. To date, these have been limited to charter arrivals but there is the potential for the market to develop. 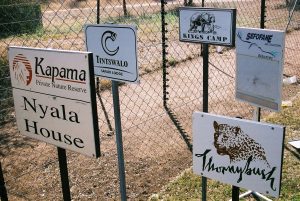 The safari industry is set up around transfers from any of these airports. You can elect to self-drive, but be cautious if it is your first trip. It can be challenging and we often suggest using a professional guide if you are confining yourself to the private reserves.